Unfortunately, development on Aligni Connector has been terminated. The state and level of support for the Altium API does not allow us to deliver the user experience expected by our customers. Instead, we suggest using Altium Replicator and the workflow outlined there.

We continue to investigate ways to improve the connection between Aligni and Altium Designer.

Aligni Connector for Altium Designer is a plugin for the electrical CAD package Altium Designer. Aligni Connector serves two primary roles in the typical CAD workflow. First, it allows schematic placement of components directly from the Aligni PLM database. This workflow is often preferred because it requires that all parts be created in the PLM database before they can be applied to a schematic. This discipline helps maintain consistency between schematics and the PLM data. Second, it provides a seamless way to push BOM revisions to the Aligni assembly. Combined, these two roles create a closed loop between your PLM database and CAD activities.

Aligni Connector for Altium Designer is not available through this website. Please email support@aligni.com and request access for this installer.

Aligni Connector for Altium Designer is a plugin for the electrical CAD package Altium Designer. Aligni Connector serves two primary roles in the typical CAD workflow. First, it allows schematic placement of components directly from the Aligni PLM database. This workflow is often preferred because it requires that all parts be created in the PLM database before they can be applied to a schematic. This discipline helps maintain consistency between schematics and the PLM data. Second, it provides a seamless way to push BOM revisions to the Aligni assembly. Combined, these two roles create a closed loop between your PLM database and CAD activities.

Once the plugin is installed, an Aligni panel will become available when you have a schematic open. At the bottom right (AD18) is the Panels menu. Enable the Aligni panel to view and use the plugin.

Setting up Aligni Connector is easy. But integrating it into your workflow and processes may require a bit of effort. The overall process is:

The Aligni-based database workflow is very similar to Altium’s Database Libraries workflow. In summary, you will maintain your symbol and footprint libraries such that each symbol (footprint) is in a single SchLib (PcbLib). This is the preferred arrangement when working with version control systems such as SVN or GIT and it works very well with a database-driven design process. If you currently have monolithic schematic or footprint libraries, you will need to use Altium’s Library Splitter Wizard to split these libraries into separate files.

For any component that you will be placing onto a schematic and (optionally) into a PCB layout, you will need to have some custom parameters associated with those parts. These will be used to tell Aligni Connector how to handle these parts within your Altium design. In particular, they will tell Altium Designer which library file contains the symbol for the part and which file contains the footprint for the part. This is why it is important to configure your Altium libraries so that only one symbol is in each symbol library and only one footprint is in each footprint library.

The use of additional PCB footprints for each component is optional, but can be helpful. For example, your design standards may specify multiple capacitor footprints that vary by density (spacing). Passing multiple footprints to CAD for the same database part, you give the PCB designer the option of selecting the appropriate density footprint for each placement.

The XML name is up to you. The table below just provides our recommendations to be consistent with the remainder of this guide.

After you have configured Aligni with the custom parameters, you can associate those parameters with any part types that will be placed on schematic. Finally, you can assign the schematic symbols and footprints to the parts in your database. Visit the settings dialog by clicking on the Aligni logo on the Library tab of the Aligni Connector plugin. Enter your site name and API token. The site name is the subdomain name. For example, if your full Aligni site URL is https://microsoft.aligni.com then the site name is microsoft.

Next, add the locations of your Altium library. This is usually two filesystem folders where you keep the symbol and footprints, respectively. When you place a part from the Aligni database, Aligni Connector will pull certain information about that part into the Altium design database as design parameters.

The mapping behavior is defined for each Aligni part parameter as follows:

When you place a library part into your schematic, the part is recorded into the Altium database with the parameters as shown in the example below: The following are the mappings (design parameters) required to assure proper functionality in the schematic, the layout, and the translation back to Aligni as a completed BOM.

We suggest the mapping below for best results.

Once the Aligni Connector setup is complete, you can go back to the Library panel and perform a refresh. This will retrieve the entire part database from Aligni and display all items in the library table in the top section of the panel. This panel is the primary interface for Aligni Connector and where you’ll spend the most time. The top section of this panel contains the Aligni item master or part index. Right click on the table header to configure which columns are visible. The search at the top will operate on all visible columns.

If you click on an item in the list, symbol and footprint previews will be shown below. Obviously, these will only populate if you have specified a symbol and footprint in Aligni, if those mappings are made correctly in your Parameter Mapping, and if the appropriate libraries are found in the search paths you provided in the Aligni Connector settings.

Double-click on an item to enable placement of that item in the schematic.

To close the loop and upload your BOM to Aligni, you will need to tell Connector which part (or parts) in Aligni correspond to your project. If you are using Altium Variants, you can map one Aligni part to each variant of your design. If you are not using Altium Variants, you will just map one Aligni part to your design. Connector will then be able to upload each variant’s BOM to the corresponding Aligni parts.

Setup the variant-to-part mapping on the BOM Upload tab.

To upload your BOM to Aligni, visit the BOM Upload tab and perform the following steps:

About Fitted / Not Fitted Handling

Within the Altium Variants system, you can specify that selected components be “not fitted”. This means that, while these components are still present in your design, they are not to be inserted during assembly. These are also called “no-inserts”, “no-pops”, or “no-loads”.

Connector offers two options for handling “not fitted” components. The default (and recommended) handling is to keep the quantity correct on the BOM, but flag them as “No Load” in Aligni. Since Aligni handles this information natively, it means that the BOM can indicate the design quantity, but still provide a BOM to manufacturing that does not include these items.

The other option is to set the quantity for these “not fitted” to zero.

For these cases, it can be helpful to define separate symbol and footprint libraries that contain these items. Instead of placing these items from the Aligni Connector library, you would place them from the native Altium library.

Not every design has a need for variants. Those that do can take comfort in knowing that Aligni Connector for Altium Designer supports them.

In this brief example, a small schematic with two variants is entered into Altium. Please refer to the Altium documentation for information about configuring and using variants.

Below are the schematic and BOM for the first variant in this example. Note that C2 is configured as “not fitted” in Altium which translates to a “No Insert” tag in Aligni.

Note also that the quantity for item 2 (000020) is 1 each. This is the default and recommended handling for not-fitted parts. If the other option were chosen, the line item would still be present, but the quantity would be 0 each.

Below is the schematic for the second variant in the example. Note that C2 is configured as fitted, but U1 and C3 are both configured as different parts. This is indicated in the Altium schematic by the bold and italicized manufacturer part number for U1 and value text for C3.

Variant mapping is done on the BOM tab. Aligni Connector lists each of the variants you have configured in Altium. Here, you can specify which Aligni Partnumber each one maps to. For this example, we have mapped the variants to two assemblies in the Aligni sandbox: 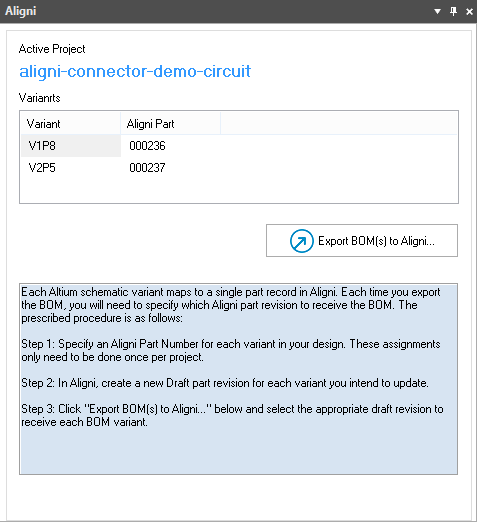 With the variants properly mapped to parts in your Aligni database, you can export the BOMs by clicking Export BOM(s) to Aligni…

Select the draft revisions to load with your updated BOM as shown below. When you click Export…, the BOM will be exported to Aligni.